On July 19th, the R.A.W. was beyond thrilled to welcome world-renowned performance artists and ecosexual revolutionaries Beth Stephens & Annie Sprinkle for the Philomath, Oregon premiere of their magical new film about the pleasures and perils of living and loving on a watery planet . . . . 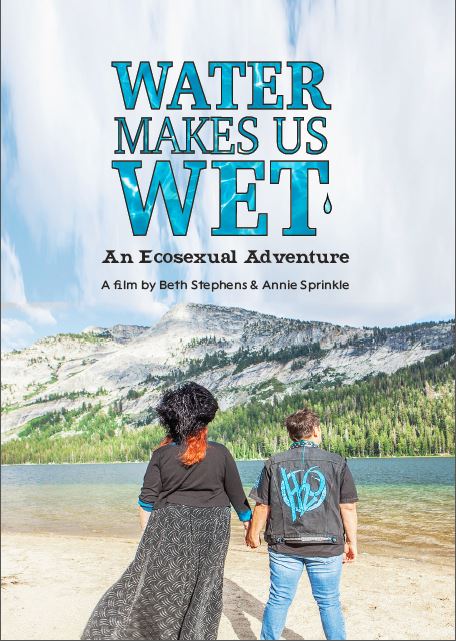 With a poetic blend of curiosity, humor, sensuality and concern, this film chronicles the pleasures and politics of H2O from an ecosexual perspective. Travel around with Annie, a former sex worker, Beth, a professor, and their dog Butch, in their E.A.R.T.H. Lab mobile unit, as they explore water in the Golden State. Ecosexuality shifts the metaphor “Earth as Mother” to “Earth as Lover” to create a more reciprocal and empathetic relationship with the natural world. Along the way, Annie and Beth interact with a diverse range of folks including performance artists, biologists, water treatment plant workers, scholars and others, climaxing in a shocking event that reaffirms the power of water, life and love. See the trailer here!

Beth Stephens & Annie Sprinkle have been partners and collaborators for sixteen fertile years. Annie was an internationally-known performance artist touring one-woman shows about her life in sex and as a feminist post porn pioneer. Beth was a feisty punk rocker dyke turned interdisciplinary artist and professor at UCSC, exploring themes of gender, queerness and feminism. In 2008, Beth and Annie married the Earth and came out as ecosexuals. Their “Ecosex Manifesto” launched a movement and they officially added the E to GLBTQI-E. Their award-winning documentary film about coal mining, Goodbye Gauley Mountain—An Ecosexual Love Story, is available on Netflix & iTunes (see trailer here). Currently they are working on a book about their work, “Assuming the Ecosexual Position,” for University of Minnesota Press. Their visual art, films and performances were presented at the world’s biggest best art event, Documenta 14, in 2016-2017. Their next film is about environmental art and artists. These girls have gone green and are dirty and proud.

On Thursday, July 19th, the Ecosexuals made their first-ever appearance in Philomath, Oregon. Intrepid art adventurers from local and regional places gathered for a screening of the new film at the historic Marys River Grange Hall, near the banks of Mary’s River amid forested Coast Range foothills and fertile farmlands. We had the intense pleasure of basking in the presence of the artists, along with videographer Jordan Freeman, who has spent many years documenting the unfolding controversies surrounding coal mining throughout Appalachia. His award-winning films, including Goodbye Gauley Mountain: An Ecosexual Love Story and Blood on the Mountain, have played at festivals around the world.

Massive thanks to Beth Stephens and Annie Sprinkle, and to Jordan Freeman, and to all of the lovely folks, old friends and new, who came out to Philomath to share this special evening with these singularly life- and love-affirming artists in the old Marys River Grange hall.